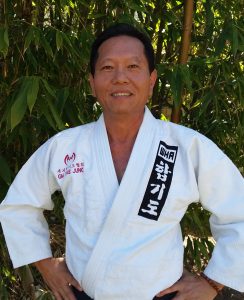 Grand Master Tae Jung is currently a 9th Dan Black Belt and president of the World Hapkido Association.
His role as president continues a lifelong commitment to teach and promote Hapkido.

Growing up in central Seoul, capital of Korea, Tae Jung was fortunate to encounter with many traditional Martial Arts and Masters, He started his Hapkido in 'Sung Moo Kwan/Korea Hapkido Association' near the house where he grew up and trained by one of the finest Hapkido instructors at the time and also founding members of KHA..,Master Ji Hanjae, Lee TaeJoon, Park JinSeok and Hwang Inshik. Tae Jung also trained in different arts such as Taekwondo, Praying Mantis Kungfu and one of his favorite weapons 'Guhm-Do' through the guidance of legendary swordsman Master Kim Sohk-Sun.

After years of hard training, the Korea Hapkido Association honored Tae Jung with the Instructor certificate in 1975 and his career as Hapkido instructor began at the Trent Gym, Head quarters of U.S 8th Army Yong-San, Korea. He had trained many U.S. soldiers and their family members during 1975-1982, until his immigration to the United States in 1982.

Since arriving in the United States, Master Jung has been teaching Hapkido, as the traditional system with philosophy of respect, discipline and confidence. Hundreds of students spanning the United States from East coast to West coast, have achieved Black Belts under his instruction. His life long dedication as Martial Artist has been recognized and awarded by U.S Congressman, chief of military forces and law enforcement.

In June of 2001, with great honor, Master Jung was appointed to the president of the WORLD HAPKIDO ASSOCIATION
and continually promoting Hapkido around the globe.