One of Highest ranking Hapkido Grand Master in present Hapkido society of Korea. Produced many great Hapkido masters during his time in Sung Moo Kwan in the 70s. as the head Instructor. where GM Tae Jung trained since a young child.

GM Lee was a senior Instructor at Sung Moo Kwan Korea where GM Jung trained. He has been teaching in Lanzarote for over 30 years and produced numerous Black belts and instructors in Spain.

Grand Master Hwang has trained many outstanding Masters and celebrities. Among those are the famous Jackie Chan and Mao Ying (the lady Hapkido). He has also been featured in many martial arts films and made great contribution to Hapkido society. Tae Jung has been greatly influenced by his dynamic style Hapkido and consider him as one of his main Hapkido  instructors.  GM Hwang currently residing in Toronto Canada and remains as supervisor of World Hapkido Association. 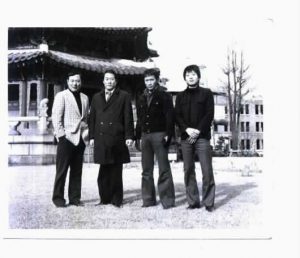